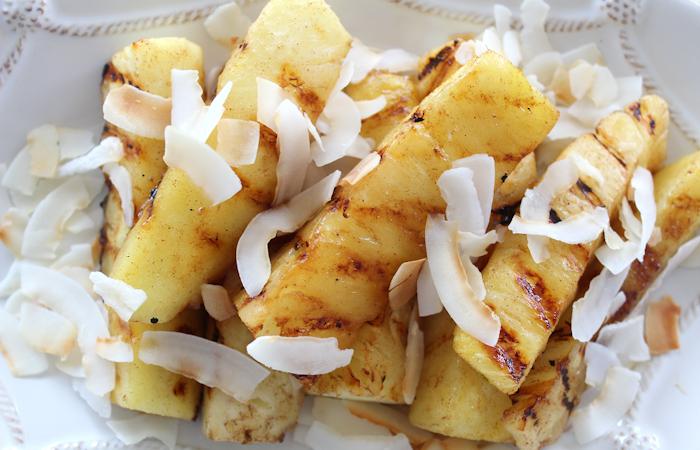 To serve: vanilla cinnamon yogurt (I use Siggi’s)

In a medium bowl, combine avocado oil and cinnamon.  Set aside.

To prepare pineapple wedges, remove the crown, bottom, and outside skin of the pineapple.

Cut pineapple lengthwise down the middle into four pieces.

Remove the core of one piece, then slice piece into two wedges.  Repeat with remaining 3 pieces.

Tip: save the pineapple core slices for smoothies!  Freeze in an airtight container, then use in smoothies for added fat-burning enzymes.

Grill on each side of the pineapple wedge for 3-4 minutes.

Meanwhile, heat a small cast-iron skillet over low heat.  Add the coconut flakes and toast until slightly golden, about 3 minutes.  Stir occasionally (and watch carefully so the coconut does not burn!) and then turn the heat off until ready to serve the pineapple.

To serve, place the grilled pineapple wedges on a serving platter and top with toasted coconut flakes.

Serve the vanilla cinnamon yogurt on the side for each person to dollop on top.