Fairytale Eggplant in a Balsamic Reduction with Oven-Roasted Peppers 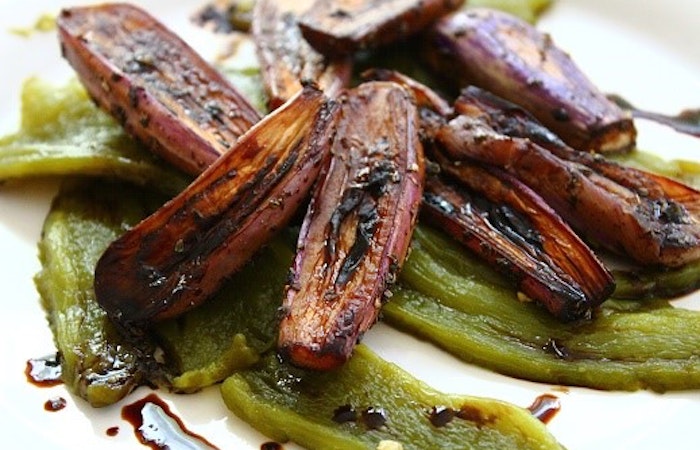 Fairytale eggplant is officially the most adorable vegetable because of its tiny size and purple-white stripes!  But there’s another reason to love this little eggplant: it does not have the bitterness that a typical Italian eggplant that you find at the grocery store has. Fairytale eggplant has very few seeds, the culprit for eggplant bitterness.  Between the smell of homemade roasted peppers, the sweetness of a balsamic reduction, and the punch of peppery oregano, you will be transported straight to an Italian kitchen.  Buon appetito!

Why (the science):  The skin of an eggplant is so rich in chlorogenic acid, a free radical scavenger, that it is ranked in the top ten vegetables for its ORAC (oxygen radical absorbance capacity) value!  That’s one powerful antioxidant-rice veg.

Roast for 20 minutes.  Flip peppers and roast an additional 20 minutes:

Remove peppers from oven and wrap peppers with foil.  Allow to steam in foil packet for 15 minutes:

Remove pan from the heat and immediately add oregano and balsamic vinegar, allowing to reduce for 3-4 minutes.

While eggplant is finishing cooking, remove skin and seeds from peppers.

Serve peppers, eggplant, and balsamic reduction as an elegant side to any meal, or serve over rice or quinoa for a light dinner!